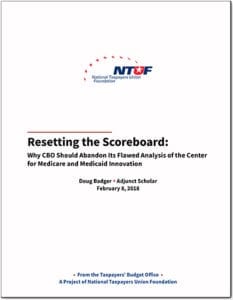 One of the impediments to repealing and replacing Obamacare has been a belief by the Congressional Budget Office that substantial federal savings will be achieved by innovative demonstration projects in Medicare, Medicaid, and the Children’s Health Insurance Program called for under the law. The CBO bases this conclusion about these savings not on analyses of projects that have been undertaken but on faith in the process.

Galen Institute Senior Fellow Doug Badger has written a paper, published by the Taxpayers’ Budget Office of the National Taxpayers Union Foundation, in which he analyzes CBO’s expectation that the Center for Medicare and Medicaid Innovation (CMMI) would reduce Medicare spending by $45 billion over ten years.  The forecast is flawed, Badger concludes, as CBO “ascribes unobserved and unobservable savings to projects that CMMI has not yet undertaken (and may never undertake).”  He says the CBO’s judgements “are in some cases questionable, in others mistaken and in still others rendered obsolete.”

But Congress’ hands are tied in enacting proposals that may actually reduce spending relative to the ACA because “CBO will score it as a spending hike if it believes that CMMI might someday test a similar policy,” Badger writes. He concludes that “it is vital that policymakers have realistic, analytically-grounded estimates, assumptions, and projections on which to base future decisions.”

Here is a link to his important and scholarly paper on the need to challenge the CBO’s “nonquantifiable judgments” and to adopt assumptions based upon reality rather than “a magic asterisk.”