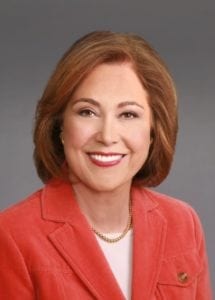 Grace-Marie Turner is president of the Galen Institute, a public policy research organization that she founded in 1995 to promote an informed debate over free-market ideas for health reform.

She has been instrumental in developing and promoting ideas for reform to transfer power over health care decisions to doctors and patients.  She speaks and writes extensively about incentives to promote a more competitive, patient-centered marketplace in the health sector.

She has been published in hundreds of major newspapers, including The Wall Street Journal, The New York Times,and USA Today, and has appeared on hundreds of radio and television programs. She edited Empowering Health Care Consumers through Tax Reformand has contributed to numerous other books. Grace-Marie speaks extensively in the U.S. and abroad, including Harvard University, the London School of Economics, Oxford University, and the Gregorian University at the Vatican.

Grace-Marie is founder and facilitator of the Health Policy Consensus Group which serves as a forum for analysts from market-oriented think tanks around the country to analyze and develop policy recommendations. She serves on the board of the Steamboat Institute and is a volunteer advisor to the Catholic Medical Association, Docs4PatientCare, and other organizations.

She received the 2007 Outstanding Achievement Award for Promotion of Consumer Driven Health Care from Consumer Health World. In the mid-1990s, Grace-Marie served as executive director of the National Commission on Economic Growth and Tax Reform. For 12 years, she was president of Arnett & Co., a health policy analysis and communications firm. Her early career was in politics and journalism where she received numerous awards for her writings on politics and economics.

Doug Badger’s career in public policy spans more than three decades and includes stints as a policy adviser to the White House, the U.S. Senate, the Department of Health and Human Services, and the Social Security Administration.

As a senior White House adviser to President George W. Bush, Doug developed the Administration’s proposal for adding prescription drug coverage to Medicare and represented the White House in negotiations with Congress that resulted in enactment of the Medicare Modernization Act.  He also advised the President on other health-related matters, including Medicare and Medicaid reimbursement issues and the creation of health savings accounts.

Doug later served as Deputy Assistant to the President for Legislative Affairs, where he helped formulate Administration policy and legislative strategy on a broad range of issues, including health care, energy, taxes, financial services, pensions and employee benefits, intellectual property, trade, and telecommunications.

After leaving the White House, Doug became a partner at The Nickles Group, where his practice included health care, intellectual property, and financial services.  He had also been a partner at Washington Council Ernst & Young, where he had a similar practice.

Doug also served for a decade as a U.S. Senate aide, serving as Chief of Staff to Assistant Majority Leader Don Nickles and Staff Director of the Senate Republican Policy Committee.

Doug writes for the Galen Institute, The Heritage Foundation, and maintains a blog at Doug’s Brief Case.

Brian Blase, PhD, is an economist and a key architect of President Trump’s health policy agenda. Dr. Blase is driven to improve America’s health care system by empowering consumers, by injecting more competition into the system, and by permitting innovation to flourish.

Dr. Blase served as the Special Assistant to the President at the White House’s National Economic Council from January 2017 through June 2019. In that capacity, Dr. Blase coordinated the Trump Administration’s health policy agenda, developed legislative and regulatory strategies, and advised the President, the Director of the NEC, and other senior government officials.

Most notably, he led the process to implement an Executive Order that President Trump signed in October 2017 that resulted in three final regulations to expand affordable health coverage options for employers and families and a comprehensive report, Reforming America’s Health Care System Through Choice and Competition.

Dr. Blase joined the Galen Institute as a Senior Fellow in July 2019 and will focus on health policy ideas and implementation.