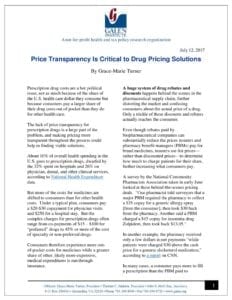 Prescription drug costs are a hot political issue, not as much because of the share of the U.S. health care dollar they consume but because consumers pay a larger share of their drug costs out of pocket than they do for other health care.

The lack of price transparency for prescription drugs is a large part of the problem, and making pricing more transparent throughout the process could help in finding viable solutions.

About 10% of overall health spending in the U.S. goes to prescription drugs, dwarfed by the 32% spent on hospitals and 26% on physician, dental, and other clinical services, according to National Health Expenditure data.

But more of the costs for prescription drugs are shifted to consumers than for other health costs.

Under a typical plan, consumers pay a $20-$30 copayment for physician visits and $250 for a hospital stay.  But the complex charges for prescription drugs often range from co-payments of $15 – $100 for “preferred” drugs to 45% or more of the cost of specialty or non-preferred drugs.

Consumers therefore experience more out-of-pocket costs for medicines while a greater share of other, likely more-expensive, medical expenditures is run through insurance.

A huge system of drug rebates and discounts happens behind the scenes in the pharmaceutical supply chain, further distorting the market and confusing consumers about the actual price of a drug. Only a trickle of these discounts and rebates actually reaches the consumer.

Even though rebates paid by biopharmaceutical companies can substantially reduce the prices insurers and pharmacy benefit managers (PBMs) pay for brand medicines, insurers use list prices—rather than discounted prices—to determine how much to charge patients for their coinsurance and copayments, further increasing what consumers pay.

A survey by the National Community Pharmacists Association taken in early June looked at these behind-the-scenes pricing deals.  “One pharmacist told surveyors that a major PBM required the pharmacy to collect a $35 copay for a generic allergy spray [from the consumer], then took $30 back from the pharmacy. Another said a PBM charged a $15 copay for insomnia drug Zolpidem, then took back $13.05.”

In another example, the pharmacy received only a few dollars in net payments “while patients were charged $30 above the cash price for a generic cholesterol medication,” according to a report on CNN.

In many cases, a consumer pays more to fill a prescription than the PBM paid to purchase the drug, even though consumers “assume what they are paying is the cost of the drug,” said Susan Pilch, vice president for policy and regulatory affairs with the pharmacists’ group.

The percentage of people paying more than $1,000 out-of-pocket a year for medicines also is on the rise: From 2004 to 2014, the portion of people spending more than $1,000 outside of their insurance coverage nearly tripled, from 1% to 2.8%, according to the Kaiser Family Foundation.  Kaiser also reported that 8% of adults report foregoing prescriptions because they can’t afford them.

There also is a built-in incentive in the health care industry, including the pharmaceutical sector, to set their prices artificially high.   Private insurers, PBMs, and others demand the discounts in exchange for their business.  Government entities also demand kickbacks from drug companies: States require them to pay “rebates”—basically a tax for the privilege of participating in Medicaid.

Because of these discounts and rebates to volume purchasers of their products, manufacturers of innovator drugs realized 39% of gross drug expenditures in 2015, according to a study by the Berkeley Research Group. Other players received 42% of total drug spending, with the largest share going to the various rebates, discounts, and fees that manufacturers pay to PBMs, health plans, government entities, and patients.  The total value of pharmaceutical manufacturers’ price concessions was $127 billion in 2016, according to a separate report by the Quintiles IMS Institute.

Consumers, therefore, are impacted in at least two ways.  Few of these discounts actually reach them directly, and many are required to pay their share of their prescription drug bills based upon the retail price of the drug.

Insurance companies generally create complex “drug formularies” in which their insured patients pay less for “preferred” drugs, especially generics, but can pay much more for expensive brand and specialty drugs.  Consumers may be required to pay a percentage of the cost—called co-insurance. Others may pay a flat co-payment.

The sickest patients needing newer and more expensive drugs to treat their illness may face hundreds or even thousands of dollars in out-of-pocket costs to get their medicines, especially

if the drug they need is not on their insurers “preferred” formulary list.

Patients who need generics—older drugs which are generally much less expensive—may face lower drug costs.  But if patients need a newer, brand-name drug, they could face much steeper prices.  Many patients are being asked to pay a greater share of prescription costs for more-expensive specialty drugs because of high coinsurance amounts.

More than half of out-of-pocket spending for brand-name innovator medicines by commercially insured patients is based on the full list price of the drug, according to an analysis by Amundsen Consulting.

Adding another layer of cost-exposure, a growing number of consumers face hefty annual deductibles with their health insurance policies.  In 2016, 83% of people who get health insurance at work faced a deductible for single coverage averaging $1,478.   That means a worker must spend the first $1,478 out of pocket before health insurance kicks in.  And if he or she needs medicine, the full retail price must be paid up front at the pharmacy.  Consumers who have coverage through the ObamaCare exchanges face annual deductibles ranging from $6,000 for an individual to more than $12,000 for a family.

Consumers benefit little if at all from the huge system of discounts and rebates in the pharmaceutical pricing chain.

PBMs and health plans argue that the savings they receive from the discounts and rebates the drug companies provide help reduce the overall cost of premiums.  Some portion may be shared directly with consumers through lower premiums and by helping to lower the cost of physician or hospital care. But the higher visible costs of prescription drugs are a key reason consumers are angry about drug costs.  That strategy isn’t helping them.

Some companies are trying to address the problem in other ways.

The Amundsen Consulting study found that prescriptions subject to a deductible or facing undiscounted prices were more than twice as likely to be abandoned at the pharmacy than those whose costs were manageable, leading to avoidable hospitalizations and poorer health outcomes.

“While biopharmaceutical companies set the list prices for their medicines, it is the health plan that ultimately determines how much a patient pays out-of-pocket,” said Stephen J. Ubl, president and chief executive officer of the Pharmaceutical Research and Manufacturers of America, or PhRMA, which commissioned the analysis.

There are a number of other price distortions in the health sector, including 340B discounts that many hospitals and clinics receive. The program began in 1992 to provide safety-net hospitals, clinics, and other providers the same kind of relief from high drug costs that Congress provided to the Medicaid program with the Medicaid rebate law.

While originally designed to help entities that serve the nation’s most vulnerable patient populations to stretch dollars further, the number of 340B entities has soared and now includes most major hospitals and many specialty medical practices, such as oncology clinics.  While 340B discounts affected 3% of hospital drugs purchased in 2004, hospitals in 2013 received 340B discounts on more than a quarter of their drug purchases.

Too often, the steep discounts that these 340B entities receive are not passed along to consumers, keeping their prices high while the hospital or other facility reaps the benefits of the lowest-price the drug companies are required to accept. Some 340B providers may sell 340B drugs to non-qualified patients (usually those covered by an insurance plan) and pocket the difference, according to a study by the American Action Forum.

The Medicare prescription drug benefit program can be a model for a more transparent insurance system.  Under Medicare Part D, insurers compete fiercely for senior’s business, with plans offering transparency on the price of drugs and the drugs listed on their formularies.  And the plans have an incentive to pass the savings on to consumers to encourage them to enroll in their plans.

Pacific Research Institute economist Wayne Winegarden explains that “the current pricing model for pharmaceuticals is overly-complicated and diminishes the beneficial role that prices typically play in a market economy.”  He explains that “most rebates are not passed on to patients, and since co-pays are based on the list price, individuals’ co-pays are higher than they should be.”

Prescription drug pricing is teed up to be the next major health reform debate once Congress completes work on legislation to stabilize health insurance markets.

Sorting through this maze of pricing distortions in the pharmaceutical sector is important to achieve viable policy solutions rather than easy talking-point “wins” that are unlikely to succeed.

The basic truth is that billions of dollars are sloshing around in the prescription drug purchasing chain, but too few of the discounts trickle down to consumers paying out of pocket for their prescription medicines.  List prices also are artificially inflated by the bizarre pricing system for pharmaceuticals. A patient needing a drug costing $800 may have to pay half or more of the cost, but a patient needing a prescription for a generic drug may pay only a small copayment. And a patient without insurance pays the full, sometimes inflated retail price at the pharmacy.

Fueling the problem, prices for brand-name pharmaceuticals have increased as new specialty drugs have been introduced at high costs, often due to years of investment in research, the costs of manufacturing more complex medicines, and regulatory delays in getting new drugs to market.

Greater price transparency is will be a crucial element in a long-term solution to engage millions of consumers in getting the best value for their health care dollar.