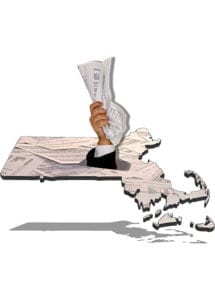 Massachusetts was a leader in expanding Medicaid enrollment under ObamaCare, and now nearly one-third of its residents are on the program meant to provide health coverage to low-income Americans.  Now Massachusetts is complaining it can’t afford the cost.

The Bay State is seeking approval from Washington for a waiver that would allow it to trim its Medicaid rolls, limit access to some services, and restrict the number of drugs available to some Medicaid recipients.

ObamaCare lured 31 states into expanding Medicaid with its initial offer to have Washington pick up 100% of the costs if they expanded access to the program to non-disabled adults with incomes up to 138% of the federal poverty level (FPL)—about $17,000 for an individual or $34,000 for a family of four.  Massachusetts pays half of the cost of covering other beneficiaries with lower incomes, so the commonwealth rushed to accept the new deal.

But Washington’s share is slated to be reduced to 90% by 2020, and now the commonwealth is admitting it can’t afford the expansion.  It wants to shift Medicaid recipients earning more than 100% FPL to its ObamaCare exchange where, once again, federal taxpayers would pick up almost all of the cost.

Enrollment in Medicaid and the Children’s Health Insurance Program (CHIP) has increased more than 30% since Massachusetts expanded Medicaid. It covers nearly two million residents –one-third of the population.  Massachusetts’ share of Medicaid spending grew from $6.4 billion in 2013 to $7.7 billion in 2016.

“At 40% of the commonwealth’s budget, MassHealth’s continued growth will constrain the state budget unless significant reforms are implemented and key aspects of the program are restructured,” Marylou Sudders, the state’s health and human services secretary, said in a letter to CMS Administrator Seema Verma.

Administrator Verma should look very skeptically at Massachusetts’ waiver request because approving it would set an unfortunate precedent for other states.  It would encourage other states to expand Medicaid, then move these childless, non-disabled adults with incomes above 100% of FPL onto the ObamaCare exchanges where a state shares little if any of the cost.

Massachusetts also wants to trim its expenses for some recipients with incomes under 100% FPL on Medicaid by not covering some services, such as personal care attendants.

But the waiver Massachusetts wants CMS to approve has an even more dangerous provision:  The commonwealth also wants to create much more limited a prescription drug formulary for Medicaid beneficiaries, restricting Medicaid recipients to one drug per class (Medicare provides at least two for seniors).

Here’s how this will surely play out:   A board of University of Massachusetts “experts” would be appointed to decide which drug in each category will be approved. That would mean that academics will be making decisions about which treatments a patient would get, not a patient’s doctor.  The board would surely be looking to include lower-cost drugs, not newer, more innovative, and likely more expensive drugs.

This is a short-sighted policy that would wind up costing Massachusetts more money and diminishing access to the medicines that actual physicians may determine their patients need.

While state flexibility is often a good thing, it is important that waivers lead to better care as well as more efficient expenditures of taxpayer dollars. This Massachusetts waiver request will fail both tests.

Limiting patients to one drug per category could mean a cancer patient may not have access to the specific drug he or she needs to best treat a specific kind of cancer. Take molecular targeted inhibitors, for example.  Different versions of these drug target different cancers.  University of Massachusetts academics, no matter how well meaning, can’t possibly make decisions that would work for every patient.

Doctors would have to go through a long and arduous approval process to plead with the authorities to prescribe the drugs that work best for their Medicaid patients. They may or may not be successful.

Limits on prescribing have been shown to have adverse effects.  Researchers looked at the impact of formulary restrictions for Medicaid recipients in Arizona with rheumatoid arthritis.  They found that the restrictions had serious unintended consequences, including increasing hospitalizations by 50% and costing an average of $900 a year more per patient.

The restrictions would also surely have adverse effects on patients with mental disorders. Patients often respond to one drug in a category and not another. Doctors can work for months with their patients to find drugs that work with tolerable side effects to treat depression, schizophrenia, and addiction. Limiting them to one drug per category may mean the only drug that works would not be available.

Currently, Massachusetts must cover Food and Drug Administration-approved drugs from any company willing to offer a rebate. The formulary restrictions would set a standard for other states, saying that people who are most vulnerable and who have the fewest resources to fund their own care should get older, less effective, cheaper drugs.

Columbia University Economist Frank Lichtenberg has shown in his research that for every one dollar spent on a new pharmaceutical, the health sector saves six dollars. If Massachusetts thinks that’s going to save money with this experiment, Bay State officials need to talk to Dr. Lichtenberg.

The British National Health Service has a board that decides what drugs its single-payer health care system will pay for—the National Institute for Health and Care Excellence, or NICE.  The Massachusetts board would set up infrastructure for a U.S. version of NICE. Oregon, Illinois, and Connecticut have similar review commissions.

This precedent that puts clinical decisions in the hands of bureaucracies would be yet another step toward the single-payer health care system for America envisioned by Sen. Bernie Sanders.  Not a good idea.